FGM is not just an act of Brutality, it is also one of Inhumanity. It is Stupidity, it is Sin. Sin is the Biggest and the Strongest word I use.

The above words were what I had written as my own thoughts on the Re-blog. All these words are Additions, after 10 hours.

I had published this post at practically the same time as ‘Living in the moment.’ This post on FGM Proves that We Do Not live in the Moment. Because, that child’s picture got a whole 10 likes, and this one on FGM, None.

Are We Sure We know what FGM is? Years ago, I had read an article on this in the Reader’s Digest. FGM is not just cutting around the Clitoris. It is also Sewing up the Entrance to the Vagina, sometimes so much that just a Matchstick could enter into it, to enhance the ‘male’s’ pleasure.

This horrible, so called ‘cultural’ practice does not only pose threats of Infection for the women, it is a matter of LIFE LONG, SEVERE PAIN. I have read that even passing Urine is a painful act for those who have had to undergo FGM.

IF We live in the moment, IF We are Concerned Human beings, We should show our Support for those our Suffering Sisters and Daughters by getting Involved in the Discussion. 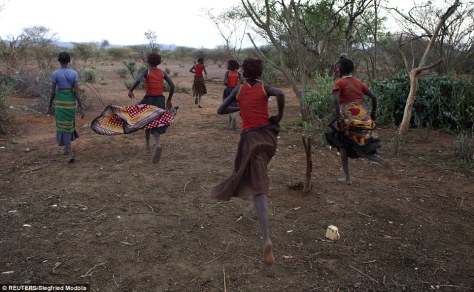 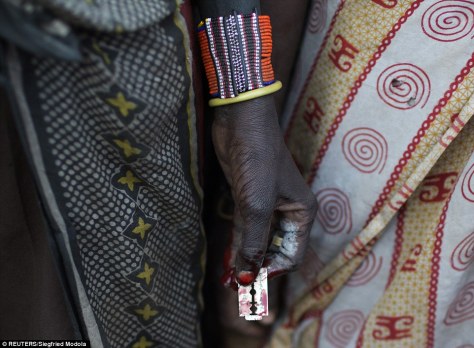 (A Pokot woman holds a razor blade after performing a circumcision on four girls. Practitioners use anything from broken glass to scissors)

Even though the brutal practice of FGM is now illegal in the country in many African tribes, traditions are more important than laws and circumcision is considered a rite of passage that marks their transition into womanhood so they can marry.

Draped in animal skin and covered in white paint, the girls squat over large stones in the remote village after being circumcised – a life-threatening custom banned in the country three years ago.

More than a quarter of Kenyan women…

6 thoughts on “FGM, an act of brutality”