Do Only Girls do that? Bring Bad Name to their Families and Communities, that is?

In India, it is held that a serious misdeed ‘Cuts the Nose of the Person, the Family and the Village.’ This Cutting of the Nose Need Not be Physical. ‘Cutting the Nose’ implies Great Insult. We have the ‘Most Known’ incident of this in the Ramayana, that of Soorpnakaha, image below from the Internet.

Very artistic, if not Realistic. For picture of a Real happening, Image below. 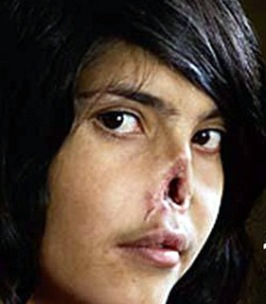 This girl is looking at the camera with Defiance, and seems to have got over the pain, and more than that, the Shame She Suffered. My Sympathies for her.

Misdeeds, particularly of the Sexual kind, and again Particularly by Girls, are supposed to bring the Greatest Dishonour to the Family.

There are those who Loot the Country – aka Politicians, Those who make a Mockery of Justice – aka Judges, and Those who Should Speak out, but Don’t – aka Religious Leaders. I hold it that is a Sad, Bad and Horrible thing that those enumerated in this little paragraph are Not supposed to be Cutting the Nose of their Communities.

But Girls who get caught in their Sexual Misdemeanour’s, Are supposed to be bringing Insult to themselves and their families. I deliberately say ‘Get Caught,’ because all this ‘Cutting the Nose’ is attributed to them Only when their Bellies begin to Swell. Poor things. Nature itself conspires against them. Because, how-many-ever Mis-deeds a ‘Boy’ commits in this regard, his stomach does not swell.

Indian Society makes a Goodly Song and Dance about this. Girls ‘Cutting the Nose’ is the Brunt of Advertisements! I found this in two instances, which is High.

There is an ad from the service provider ‘Birla,’ an Old and Revered name in India. It is for ‘IIN’ (Idea Internet Network), whereby one does not have to leave the house to learn. Fair enough and Innocent enough. But, to establish this point, they have used these words:

“Jo Lakshman rekha paar karegi, Saare Kul ki Naak Kataayegi.” [The Girl who crosses the Lakshman Rekha, (refer the Ramayana), will Cut the Nose of the Whole Community.] The words, ‘Muh mein Kaalikh,’ (Blackening the Face), another Simile with the Same meaning, are also used.

Image above and below by Screen capture from Youtube.

The woman in the forefront had been explaining that a Girl going out of the House or Compound could bring Dishonour. And that that is why they are using IIN.

The second advert, by JSW Steel, while also using the same words and thoughts above, uses them in a Mocking way, showing that Girls going Out can also bring Honour to the Community, as has done Geeta Phogat, the Award Winning Girl Wrestler from Haryana. 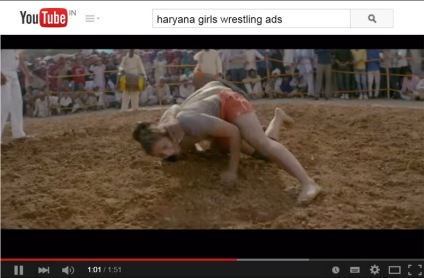 See HOW differently Indian Society holds and treats ‘Males.’ The picture below shows the man accused of Raping a Five year old Girl. Yet, let alone ‘Blackening’ his face, it is ‘Covered,’ to avoid him Shame.

[I Spit on the judicial-law-and-police system that does not Name, Show and Shame Low-Life like these.]

It is a Great thing that Chastity is held in Such High regard in India. But it is Criminal to hold that Only the Girl brings Dishonour to Home and Community If She fails in this.

Each Mother and Father, and the Community should Hold and Teach their Male Offspring that He too would be Guilty of Shaming the Very Community in such Circumstances. And If Guilty, The Male Child too should be Shamed to the Same degree as the Female one.

PS: A note on Haryana: This is a state in India where they talk Much about Girls cutting the Noses of their Families. I ask:

The Idea that (Only) Girls bring Dishonour to the Family is the Result of Very Bad Upbringing, and Very Bad Value Systems. Both these have to be seriously addressed and Changed.