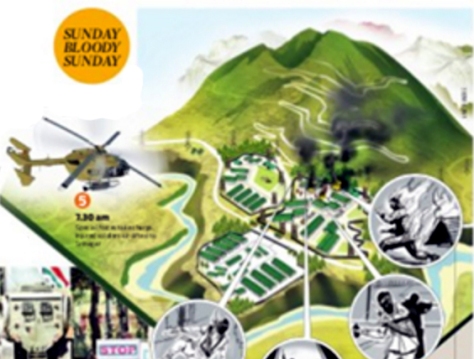 Graphic from the Internet.

“On 18 September, four militants attacked an Indian Army brigade headquarters in Uri, near the Line of Control in a pre-dawn ambush.

They lobbed 17 grenades in three minutes.

Most of the soldiers killed were from the 10 Dogra and 6 Bihar regiments.

The casualties were primarily believed due to have occurred as a result of non-fire retardant transition tents. This was the time of a troops shift, whereby the 6 Bihar regiment was replacing the 10 Dogra regiment. The incoming troops were housed in tents, which are normally avoided in sensitive areas around LOC like Uri.”

[ The above from Wiki, reference a little below, and edited for brevity. ]

For all that, I blame the officers for their Slackness, with reference to the Tents, and in the Security of the Area.

The Military has its own ‘Quaint’ terminology. War Games. Black Flag Operations. Collateral Damage. And a thousand more, of course. pakistan saying Indian Soldiers at Uri Killed by the Indian Army itself, and blaming the other side for it, would be a Black Flag operation.

As I have said in the link above, this is Hardly possible.

India, for all its weaknesses, of all sorts, is Even Now, a Peace Loving Nation. …The LoC, the Line of Control, is Not an International border, but which has been achieved/brought under control by operations without a War having been declared. The orders and the command to Fire-back, answer enemy fire, is Not Easily given in India. Though it has been given at times, and has been given at the present moment again.

India has Nuclear Arms now. Yet they do not come much into the news, though the fact is Internationally known. (This knowledge is difficult to hide). This is Another way of saying that India is Not a Sabre Rattling Nation. This is Unlike North Korea, which constantly threatens with its nuclear warheads, and Pakistan, which has said that it will go to the extent of using these in case Waters to it are stopped.

95-98% of Pakistan follows Islam. Not that I object to it. But India, on the other side, has roughly 80% Hindus, 14% Muslims, about 2.3% Christians, 1.7% Sikhs, besides others. The Indian Military is Well represented by the Minority groups, besides the majority one, of course. On the other side, The Indian Military also has personnel from All the States of India, (Gujarat is an exception, having about just 1% therein). With all that, the Indian Army is a Well knit, SINGLE UNIT.

Particularly in view of the above point, it is Absolutely Irresponsible to say that Soldiers of the Indian Army would Knowingly and Willingly be Ready to Kill their Own.

It Is True that ‘The attackers sneaked into the camp breaching heavy security and seemed to know exactly where to strike.’ From: <https://en.wikipedia.org/wiki/2016_Uri_attack&gt; But this would mean Spy/Spies within the Ranks rather than Black Flag operations. The latter would mean ‘Planning’ by officers.

pakistan had claimed the Same for Acts of Terrorism at other points of the globe. These had originated from its soil, in that those Terrorists were Based/Trained-in pakistan, to the extent of being trained by the pak army