I Beg my Friends abroad not to think that police behave thus, as the title indicates, Only in India or in Russia. So let me start with a picture I found on the internet, about methods in the US. Reports of this sort have not come in some time; this is a bit old, and I hope situations everywhere Improve, but yet, for what it is worth, here it is – the Kindly use of Pepper Spray:

Now, from my Beloved India:

“A man brutally stabbed his wife multiple times in the midst of a busy marketplace, right outside a police station in Mira road on Tuesday evening.

The woman who sustained cuts on her face, head and neck, is undergoing treatment at a private hospital.”

From the internet report from site quoted below.

Later reports said that she was stabbed a shocking multiple times, requiring 50 stitches, – this number was mentioned.

And look at the way he has been allowed to cover his face, and the ‘gentle’ way in which the police is handling him, which You can see in full in the video in the link.

The portion at the left shows our case. By screen capture.

The Well-made cover shows that it is not something the criminal took out of his pocket. The police provide them!

Curses on the lopsided system of justice.

All that the police seem to assess is whether the accused would be able to dish out Money, and how much. They are Trained to read face and body language; they know their criminals, yet treat Citizens Violently, and the criminals with Indulgence.

Definitely judges have to judge.

But the work of the Justice department cannot stop with that. It has to see to Justice in the Land, or else it has failed in its duty, and in that case it should resign en-masse.

Let me give You some More examples.

It’s not just the police. They are mere tools, and henchmen. What they call ‘எடுபிடி’ (Edupidi) in Tamil, – those who catch and fetch, the menials. I do believe they have to take permission before they can even…

So, when known criminals, serious ones at that, are handled with velvet gloves, what are We to say?

The men with their faces covered are murderers for hire. One of the captions also says that the police have been successful in nabbing them. But do these criminals seem troubled to You?! It is as if they know they are in safe hands.

This is a man, a tailor by profession, who is reported to have molested hundreds of Minors! Yet, nary a police grip; nobody can blame the police of brutality or atrocities here. 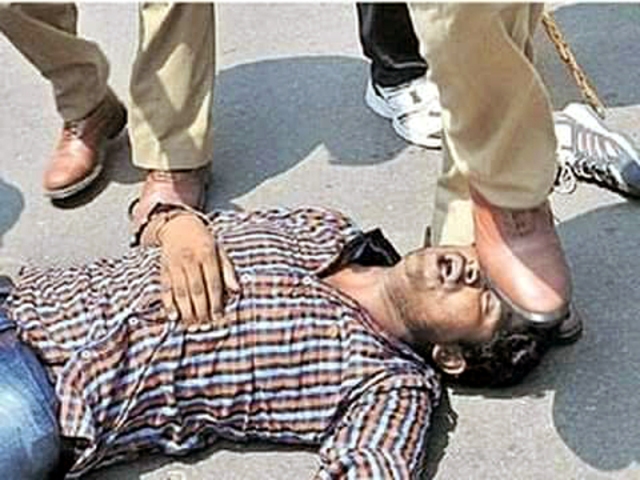 So, even the women police do not hesitate to do this, absolutely without necessity, …to Children.

All images from the internet.

Unless and Until the Citizen gets the Guts to speak out against such things, such things can happen to him too.

He forgets that. Upon his head.