As background, seems an inglorious 8 rapes/gang rapes within the last 6 days have taken place in the glorious Indian state of Haryana! Who knows, these fellows might even be expecting some prizes for doing that, or, at the least, some jobs in the public sector. That is the state of our Country today.

All that being so, another interesting, though Heart-breaking piece of news was mentioned during one of the debates over the TV, namely, some young man, who had earlier raped a girl some three years earlier, and had since been released, – not found guilty or on bail, I am not sure, raped the same girl once again during these days.

That is the Cursed situation of India today.

In all this, what riles me is that these Rapists are practically Molly-coddled by the administration (read government), the police, and the judiciary, by extension, as these have never questioned not challenged the practice of the police to hide/cover the faces of these Rapists and other Criminals. And these rowdy buggers march along with their chests thrust out, well knowing that they will not be recognized by the people at their next Avatar, excuse me, their next appearance.

Below, a photo from my files, – in turn from the internet, which I have named: ‘Kill with open faces, get your face covered courtesy of the police.’ 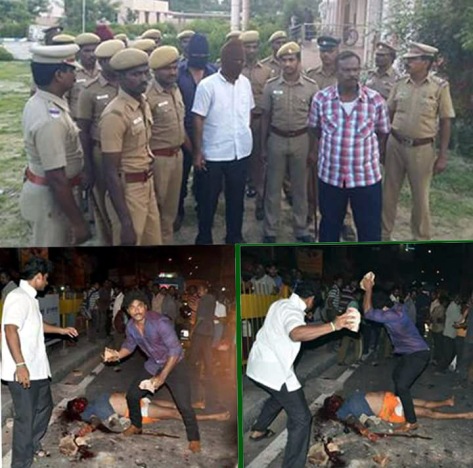 All these policemen, especially the officers, are interested in is: getting their photos into the media.

And does the criminal seem in any way cowed to You? Stands tall, and bold as brass, does he not?

And here is my question to the media:

Why don’t You, @MirrorNow n @ndtv, ask Why the #police are covering the faces of these criminals? Why are the #police protecting them?

Cursed may the whole system be, the administration, the politicos, the judges, the police and the other officials, who have NO concern for the Honour or the Safety of the Citizens, but protect, – how else without Money, the names and reputations of Criminals.

2 thoughts on “Tweets to @MirrorNow and @ndtv”