Hello, Folks! You All know that I do not pull my punches. And here goes.

You will not find too many people writing on subjects that I do, and especially Against the Joodges. Yet we can be Sure there are others. The point is that those few of us who write seem to have Succeeded in pulling up the system, so that 2017 was a particularly Good Year for Indians, Justice-wise.

Encouraged by this, I go on!

Our Writings seem to be reaching those Long Deaf Ears.

So I ask You, my Dear Reader, to Speak to Your Family and Friends about this, Write about this, and, if You will, Re-blog this. You might want write a few words about leaving out the crappy bits.

Judges, (let me limit myself to Indian ones, and, just the majority, not all of them), have Earned my Contempt.

This because the Justice Department has failed. I wrote to the union of Peanut sellers at bus stands asking if they would accept responsibility for this failure, but they Declined, so it stays with the Joodges.

One of the Very Best examples of the Failure of Justice in India is the raising of the Bofors (scandal) case now, for something that had happened in 1986! If the Justice Department has Constipation the Citizens should not be made to suffer for that.

That being the condition of Justice and the Joodges in India, today Referees have earned a Horse-Manure Certificate.

All of TWO runs were required to finish the game of the Second One Dayer in Cricket in South Africa, (February 4th, 2018). They took a 45 minute Lunch break, leaving the ground 80% empty because of this Asinine delay. 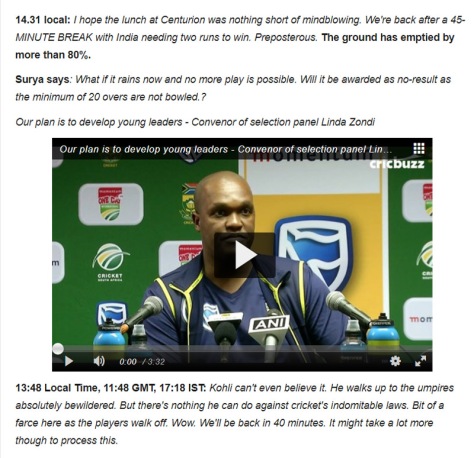 Graphic above from Cricbuzz.com

But Rules are rules, even, and particularly when, they have been made by Asses, and executed by Donkeys.

Incidentally, this is an Excellent instance of STUPID LAWS!

Two incidents of Extremely bad refereeing are imprinted in my mind. One was a World Cup / Olympics Foot ball final, in which Cameroon was playing against England. The referee was Blatantly against the Cameroonians.

The other is where the Indian Boxer Sarita Devi, though totally dominating the match, was declared defeated.

In India, where chief judges of the country hold that office for as little as One day(!) – for what else but Pension benefits, I had great regard for Oliver Wendell Holmes of the US who had held that office in his country for decades.

But even this man seems to have come up with:

And here we poor folks have been, and are yet, sitting on our behinds looking for Justice.