The Israeli film jury head suddenly u-turned. Had written abt it, but can’t find the tweet now. The point is India, is an Importing country, with Billions of customers, that status will be maintained, using all necessary pressure for that.

Biden praises India! And modi a self declared Charvaka (hedonist). Democracy, Morals, Values, …these are words of yester year. When all gets said and done, We start with ‘Water world,’ of course.

modi has bought SO much of putin’s oil. YET petrol-diesel is extremely expensive in India.

I shall confine myself to the TV media and the Social ones.

The Netizens have a name for the TV channels in general in India, namely, ‘the godi media.’

Take, for instance, the TV channels tearing into the 19 children killed in the US, (heinous as it is);

I mean buy your effing oil and coal, but Come out and Say putin bombarding from AFAR, on Civilian areas, is wrong.

THAT is the problem. Under the bjp, India has lost her soul.

Everything, and I mean everything that modi does is a masterstroke for his uneducated supporters.

It could mean the media that is modi’s/bjp’s (this latter being the ruling party in India just now). It could also mean that it is modi’ media, but We dont have enough Freedom to say that.

People just blame the media, saying it receives/accepts money from the bjp.

But there is something worse; much more sinister. The bjp simply and Easily resorts to Violence. And People Know that. And are Afraid.

So, all in all, India is a democracy yet, and the media is absolutely free.

During one of the (Indian) TV debates/discussions today, heard some (so-called, that is how I will address him) political analyst / strategic expert say that the usa had not come to India’s aid during the 1962 war with china I would say, …it was not mentioned.

As such, this so called expert implied, India is leaving russia’s war on Ukraine to be sorted out in the West!

It does not matter to these idiots and the media, not to say the political heads and the populace of India that there are Major differences.

India and china are Not Mouse and Cat in size, though, at present at least, china has the Bigger military macine.

Whereas there is No comparision between Ukraine and russia, area wise, or by way of military strength.

putin should be ashamed of his undeclared war on Ukraine.

china, during the 1962 war, had NOT reduced Indian areas to rubble. I had been living in Gorakhpur during those days.

Both above images are from Indian media. Why aren’t India’s so-called experts ready to believe this?

Or, do they mean to say Indian media could not find out, or, would not report, if the destroyed buildings/hospitals were used to hide Ukrainian military?

Above all, Who is the LIAR? putin, who till the Very last day, had said he had No intention of invading Ukraine, …Or

It will be said that putin did not invade Ukraine. Why did he not send his army into Donetsk region and been done with it? (Why did he not do it earlier?)

Nobody can deny that things are getting better, All around the world, in spite of frightening presentations, especially wrt #Ecology, as excellently presented by #BBCEarth, etc.

What is happening is this:

And Colleges are busy dishing out ways to ‘earn’ and to Get better jobs.

#Journalists too, hiding behind Trained Smiles and Brash voices, forever Self proclaiming to be presenting Truth, are Merely Securing their #Salaries.

To give the idea, I liked this picture.

IN THIS, I BELIEVE #MEDIA CAN DO WONDERS.

Below: The graphic says: A people who do not Lift up their voice Against evil, Will Lift the Biers of its loved ones.

My Dear #media, MAKE Yourselves into the IVth Column again!

Don’t tell me you already ‘are’ that. What you are today is like the columns of #Delphi, good only for ‘Time-pass,’ that favourite of India.

In the book ‘#REMO, Unarmed n Dangerous,’ by Warren-Murphy, We have the #Diamondtoothed villain, introduced as Shooting a journalist (ends unpleasant reportings, see?).

Thus conceded, Journalism is Dangerous. Dammit, ANY form of Opening the mouth is dangerous.

#Samriddhi Sakunia, #Sandeep Kothari, #Jagendra Singh, #Narendra Tapolkar, #Govind Pansare, #MM Kalburgi, #Gauri Lankesh and More… All who Opened their mouths and got Killed for their pains, are all True #MARTYRS.

…A fellow had headed groups killing Muslims, speaks of it in a ‘sting’ operation. A link to that video is given below, followed by part of what he admitted:

HOW LONG do you hope to put a (temporary) stop to #constructionwork, #vehiculartraffic, etc, without addressing #stubbleburning and #firecrackers? Till the Next Harvest/Diwali?

Why does not the #supremecourt Order the #uniongorement to Aid the #StubbleProblem, instead of vanity projects like the #Vista and #Delhi’s #SecondAirport?

Would anybody care/dare to inform increase in bronchitis/asthma cases at this time?

Does even #media think, or want to say, that Smoke is Not affecting ‘their’ children n families?

The #supremecourt of India seems to have an awl up its backside, in the form of ‘their’ families being affected. Why else would this august body, which cares zilch about ‘Gang Rapes,’ speak repeatedly about #AirQuality in Delhi?

It is Time to Rethink #JournalisticObjectivity. The Whole Idea behind that was that people would ‘decide’ for themselves. The Problem is that Indians, by and large, are the Most Apathetic of people. Left to them, my Dear #Journos, the honest among you would all be burnt to death, one by one, and the Cowards would be left to Live with that on their #Conscience, a Very Heavy burden, – Google it if you want.

It is Time to Emphasise the idea of #Journalism is to

‘Serve as a Watchdog over those in power, PARTICULARLY THE #JUDICIARY.’

in which I include #judges and #officials.

The #media is not just an estate a column. It is a Cannon, Powerful.

Ok, it is Not going to be easy.

But the #media Speaking Up on Social issues is a Must.

#Journos are Also #FamilyPeople and #Citizens. #Bronchitis, #Asthma, do not spare members of the #judiciary or #journalists.

#Media has to let India Know, by way of Regular Hints, of the Pressure put by the Union gorement on them, and the Failings of the #JUDICIARY.

It is Either Speaking Up and putting the Neck on the block,

Dealing Bronchitis and Asthma in the children, etc, and even Worse, as Time gets by.

We find the nation going Hammer-and-Tongs behind somebody whose name is #Khan, whereas No drugs were found on him, 10 gms found with those who were with him.
The modern 1 rupee coin of India weighs 4.85 gms, call it 5. Take 2 of those. …The usual Trucks of India carry 3000 Kgs. So 2 small 1 rupee coins are getting More attention than a Whole Truck-load, bec ‘that’ name is #adani, #modi’s friend.

That is our Indian #media.
And the #judiciary is happy receiving its Fat salaries and perks, and worrying about its pensions.

For all his seniority, @srinvasan is like a XIIth class boy. He has missed the Forest for the Trees.

@Congress has been Bad.

Congress has also erred in Not meeting #AmrinderSingh, now ex cm of punjab.

@bjp IS Bad, in its very Nature.

@Congress n esplly @Rajiv have Improved; whereas in its 7 yrs, @bjp has only gone from Bad to Worse, n No Sane mind would believe @bjp would give up its #Violent, #Rowdy, #AntiDemocratic mindset.

Hv called @srinivasan a class XII boy bec he chooses to kneel to the #bjp, whatever the reasons. He shames the proud #South. And @ndtv has @RavishKumar, that Gem among #journalists. …Hope @ndtv improves.

My Dear Friends, after having gone to Your pages, and having read Your posts, when I give a ‘Like,’ a small window appears, and then automatically disappears! And the like is Not registered. 😦 Don’t have an image for that.

Similarly, when I want to comment, am given the choice of signing in thro Wp, Fb, etc. …When I Click on Wp, sometimes I am logged in, at other times, ‘this’ happens. A site I had gone to, #EricAlagan’s, when I go to check the progress after writing all these things, (am NO tiger in this, mind You!), I still find the ‘progress bar,’ still progressing. 😦 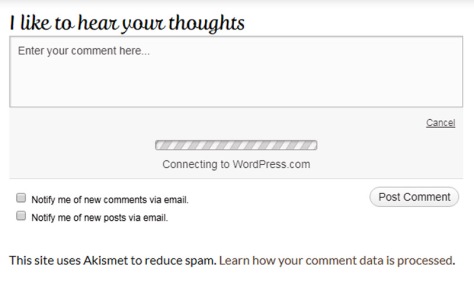 So, Please don’t be surprised if You do not hear from me. Thanks.

1. rahul, just shows what crowd you hang around with.

2. THAT is Not India. Since you do not know, India lives more then 70% in the villages.

3. Hanging yourself a Better choice than reporting from your armchairs.