“Carry one another’s burdens,” says the Bible in Galatians 6:2. And Patricia says it with a Beautiful Graphic!

Quote of the day – Ann Romney

Offering some different Ideas. The Very first sentence, ‘Even the scriptures stand against you,’ can be Challenged – Thus:

Quoting passim, we have:

“God said, We will make human beingS, THEY will be like Us, …God created human beingS, making THEM to be like Himself, …blessed THEM.”

These should be Ample. Regards.

via A Woman’s Worth

Posted in Relevant Biblical verses. This is meant particularly to clarify certain words in other posts.

Actually even these cannot be really be called dirty words. But some of Us might think so.

“She Flaunted her Whoring, she stripped Naked; …she had been Infatuated by profligates Big-membered-as-Donkeys*, ejaculating as violently as Stallions.” (Ezekiel 23:20 Jerusalem Bible, passim).

*Big-membered as donkeys = Having Penises as Big as donkeys.

‘She’ represents the whole Nation/People of Israel (of that time).

‘Her’ Lusting Actually had been after Idolatry. “She Defiled herself with All the Idols.” (Ibid, Verse 7).

Let Us Not look at the ‘words.’ The Issues are what matter.

YISSURIM, A very new word I came across today, in Nechama‘s post.

“When he draws us close, it is too much for us fragile humans.  We shatter from being so close. That is the pain of Yissurim.

Our challenges are not an act of torture, they are an act of love. An act of being brought close to Hashem.”

The Rabbis explain this by quoting the Scriptures, which, in Biblical terms, come to:

“The Lord Corrects those He Loves, as a father corrects a son of whom he is proud.” Proverbs 3:12. TEV., and –

“Have You forgotten the Encouraging words which God speaks to You as His sons?

‘My son, pay attention when the Lord corrects You,

And do not be discouraged when He rebukes You.

Because the Lord corrects everyone He Loves,

And punishes everyone He accepts as a Son.’

Endure what You suffer as a being a father’s punishment; Your suffering shows that God is treating You as His sons. Was there ever a son who was not punished by his father? If You are not punished, as all His sons are, it means You are not real sons, but bastards.” Hebrews 12:5-8. TEV.

Of course, and Frankly, the words: “A Father ‘Punishing’ his son” sound Repulsive. But let Us think in terms of the Coach saying: ‘Drop and give me 50.’

The Coach wants You to reach FAR.

The Coach sets Challenges in front of You. 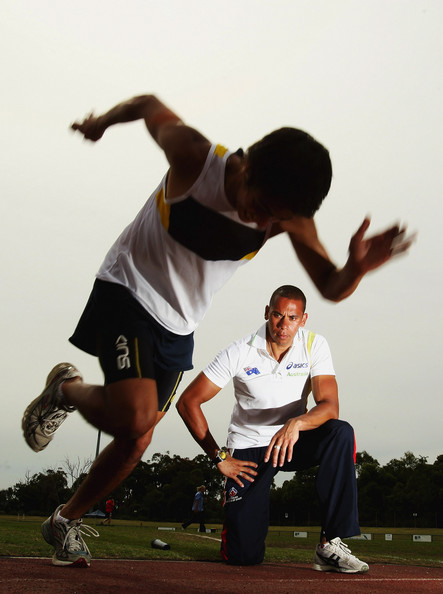 The Coach does not let You ‘be.’ He watches over You like a Hawk.

The Coach Bites Your head off, if necessary! …See How ‘Taken-aback’ this young man is! The Young man can push his Coach down with his little finger. But, he is the ‘Coach.’ If You want to Improve, You LISTEN!

BUT THE COACH WILL DO ALL THAT ONLY IF HE BELIEVES IN YOU!

It is a Sad fact that both the father and the coach might Give up on the Non-Trier. Particularly if he is a ‘Paying’ student, he will be tolerated, even molly-coddled, but, knowing that he is not going to reach the ‘heights,’ neither the coach nor the parent really ‘Drives’ this kind of person.

Now, to get back to Our YISSURIM, two Images! 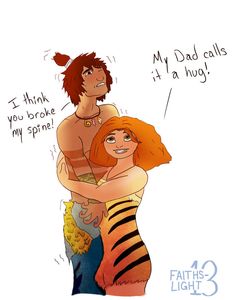 When the Lord draws us close, it is too much for us fragile humans.  We shatter from being so close. That is Yissurim.

ALL images from the Internet.

‘Surely, Only Goodness and Kindness, Shall follow me, All the days of my life.’

That is Psalm 23:6a, and my own translation.

If We pay attention to the words that are underlined, We notice that they call for Astonishing things! They also call for Trust, and if We do that, We will find that they are Fact Indeed! Dhyaan helps Us in this Realization.

But this is part of God’s Word. And in my own humble way, I Attest that they are True, and that I have found them to be True in my life.

Christ Unabashedly used the word ‘Forgive’ an Astonishing 6 times in a mere 3 verses, that too, near Consecutive ones. Matthew 6:12,14-15. As under:

That’s How Important Forgiveness Is!

Mankind has Long believed that Sins require an Atonement, even unto the Sacrifice of a Life. Many offerings were Decimated, for instance Burnt, to show that it was Totally Offered to the Divine. This was done to Grains, Oil, and even to Livestock, etc.

Ancient religions have had the practice of sacrificing Living Creatures and Animals like Chickens, Goats and many others. This can be noted in the Chhota Nagpur belt in Central India, home to one of India’s Original dwellers. But it is prevalent all over the country, albeit on a lesser scale.

Leviticus 16:20-22 says thus: “Aaron …shall place his hands on the Goat’s head and confess over it all the sins …of the people of Israel, and so transfer them to the Goat’s head. Then the Goat is to be driven off into the desert.” 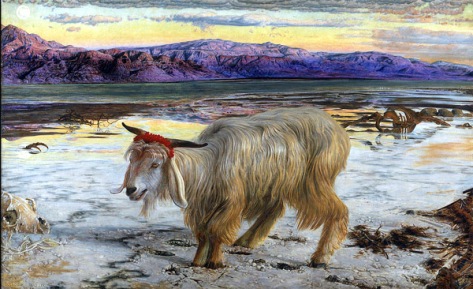 The Scapegoat by William Holman Hunt, 1854

Here is the poor fellow, nicely decorated with a red band across his horns, Thank You, but… He seems to be bogged down in a bit of salty Marsh, and is bleating – Piteously, No? This might be considered an artistic touch by the Artist, but not impossible to imagine.

But the Main thing is that now the Goat is not just at the mercy of the Elements, but also an Easy Prey to the Wild animals as he is without his shepherd to watch over him.

And that was the Whole Idea, Abandoning him. This Sacrifice of that animal is supposed to be the Expiation for the sins of the people.

And Christ became that Sacrifice. For the Whole of Mankind. For All Time. There is a Lot of Anthropomorphism in Religion. A few references below:

That is Why Jesus is called “The Lamb of God, Who takes away the Sins of the World.”

This incident, well known even in Non-Christian circles, is, on the one hand, a Perfect example of the Pig Headedness of ‘Man,’ or in other words Male Chauvinism. On the other hand, it is a Superb example of Christ’s Teachings, and the way he answered His critics. And Teaching Supreme to Us, of course.

The Sanctimonious ‘Teachers of the Law,’ (what ‘law’ they must have taught!), and the Pharisees, those ‘perfect keepers of the law,’ – in this case, bring a Woman Caught in Adultery. The Judgement has Already been passed, by them and through them, to Carry out the Stoning.

They only want to Trap Jesus into saying or doing something that they could find Fault with.

Whereas there was Plenty that Jesus, or Anybody who knew the law of Moses, could have found Faulty in their Thinking, Speech and Behaviour, as in the case of this Judgement. Because, the ‘law’ on which they are relying, and which they would have quoted, says:

“If a man commits adultery with the wife of a fellow-Israelite, Both he and the woman shall be put to Death.” Leviticus 20:10, TEV, emphasis mine.

[In fact Many paragraphs of this chapter in Leviticus deal with Adultery, in Every case addressing the ‘man’ as the perpetrator. See Levi 20:10-21].

If somebody wanted to hold on to the clause ‘fellow-Israelite,’ the parallel verse in Deuteronomy 23:22 says:

“If a man is caught having intercourse with another man’s wife, Both of them are to be put to Death.”

Those who are Questioning and Challenging Jesus are supposed to be Teachers and Experts of the law (of Moses). As such they Would and Should have known the above. Yet they have twisted it, bringing the punishment Only on Women. That is why I call this Male Chauvinism, etc.

Given all that, If those who have sinned are to be stoned, there would be Nobody left on Earth. That is Why Jesus said:

“Let him who is without sin caste the First stone.”

In Actuality, the Heading should read: Paul Stoned to the Point of Death. But I will let it be, as I do not want it to be too long.

“Some Jews came from Antioch in Pisidia and from Iconium; they won the crowd over to their side, Stoned Paul and dragged him out of the town, Thinking that he was Dead. But when the Believers gathered round him, he got up and went back into the town. The next day he and Barnabas went to Derbe.” Acts 14:19-20.

It becomes evident that Paul had not died of the Stoning. In No way is the event Celebrated by the writer of the Acts as a Resuscitation, as the Believers having Raised Paul Back to Life through prayer and intercession.

In one way, it shows Us How Sturdy Paul must have been. We might call that a minor point. But We also see that God had not intended to end Paul’s life at that time.

For-All-That, those who had attacked Paul had dragged him out of the town in the full belief that he had died by the Stoning. He had come that close to Death. 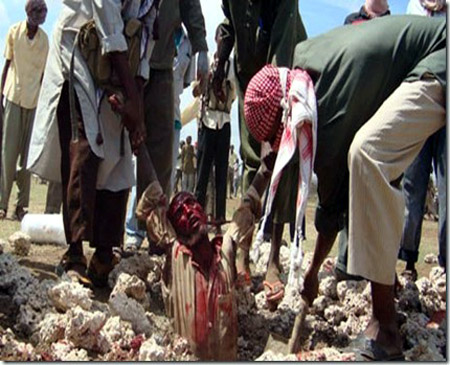 Above, a real incident of Stoning, image from the Internet.