My friend Phil, pjwmia.wordpress.com, in response to my post, had written:

“As you know our idiot in charge is apparently currently being “sucked up to” by your yours. We have gotten reports of protests and injuries due to Mr. Modi and his policy that effects Muslim citizenship. Not much is explained but claims of huge crowds greeting the two. Is there a source I can go to on line that might provide more facts and details on the situation both the treatment of Muslims and the great love displayed for Mr. Trump? Any help would be appreciated.”

My belated reply became quite longish. And here it is, for the interested:

My Dear Phil, Thank You Very much for that, and DO, DO forgive me for being so late in getting back to You. (A bundle of very real reasons including poor health, my left hand not typing like of old, etc, contribute to this). …Yes, the two Idi*ts, Yours And mine, have become close to each other, and for many reasons. One is ideological; both being followers of Fascism. The second is the Following that they get in this, from their Brainless supporters. Heady wine stuff.

As for the Anti Muslim agenda, it has been in preparation for at least 60 years, I would say, as I recall my Youth. And Absolutely Needless, as India’s Muslims, though they keep very much (too much) to themselves, and are even a loving and helpful lot. …And the agenda is prepared by the likes of Amit Shah, our home minister, and the think tank of the RSS, an organization that represents India’s Far Right. modi is just a willing instrument in their hands.

The above group knows that it would not receive support from Europe, or Most of the world, for that matter. Hence these two ‘friends’ fawn on each other.

I do not know about the States; but in India, Most of (political) crowds are gathered for the price of a few hundred rupees, in many cases as low as Rs. 150 (2 dollars!), a meal, and oftentimes a small bottle of alcohol. So let us not think that all those people lined up out of love for good ole tRump, though watching celebrities is one of India’s favourite pastimes.

The Anti Muslim agenda is Very real, but Not easily Perceptible. ( Thus the Very Large, numbering in Hundreds of Thousands, – totally Unprecedented in India – of mainly Women gathering at nearly 30 cities in India, being called the Shaheen Bagh protests, after the place where this had originated ).

…The idea might be, must be, to take over Muslim properties, though this is not going to happen in a day.

They would also be Dis-Enfranchising the Muslims, (and later the Christians, who are happily slumbering away).

And end up with a Hindu Rashtra (Nation). But mind You, they do not want to make this So Simple! …After all, we have Many nations that are Hindu, (as a nation, Nepal was one), More as Moslem, as Iran, the Middle East, and in Southeast Asia.

BUT THEY DO NOT HAVE DETENTION (CONCENTRATION) CAMPS, BUILT FOR THE MINORITIES. 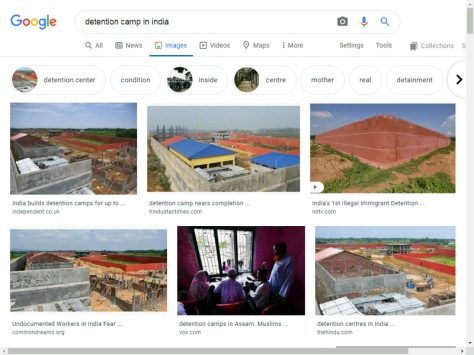 India’s central administration brought in two, hasty, ‘mid-night’ acts in the parliament. One is called the CAA, (Citizenship Amendment Act) an innocuous one that says India will give citizenship to refugees from Afghanistan, Pakistan and Bangladesh. …Do they even need a law to do that? But the fun part is that it will not give said citizenship to …Muslims.

Then We have a thing called the NRC, the National Register of Citizens, which, it is said, will affect NO Indian citizen. …But YOU will have to prove that You are really an ‘Original’ citizen of India. The administration shamelessly concedes that citizenship papers might have been ‘bought,’ aka Bribery. So How do You prove You are an Original citizen? We shall have to show ‘Land Ownership Papers’ dating at least 60-70 years. (India’s biometric Adhar card, the Voter Id, Your Passport, would not be considered valid documents for that!)

And therein lies the crux of the matter.

If a Non-Muslim is lacking the requisite documents: “Sorry for the trouble; You can go.” Muslim: “To the Detention centre You go!”

amit shaw brazenly does double and triple talk, falling back on: ‘It will affect NO Indian citizen.’ But the minions have got the idea, have scented blood, and We have Lynching, Destruction of houses and property, 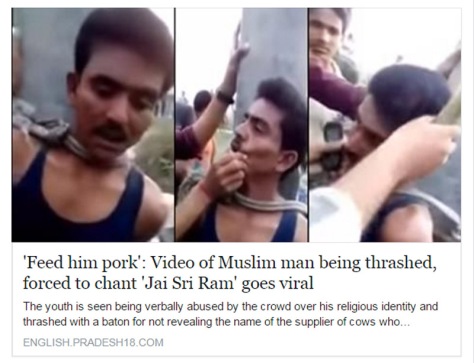 …All denied by the administration, and taking NO action on culprits; actually they are lauded. 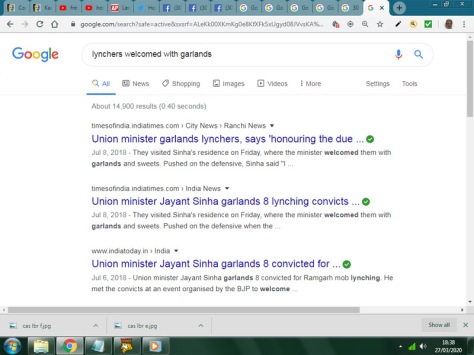 Indian media is a Highly controlled one. Either they would lose their licence, have (false) cases slapped on them, or… I would not put Violent threats against family members beyond the ken of things here.

Thus I Highly doubt You will get a report of this sort anywhere! …And I would Highly doubt that it was love for tRump, (most Indians would not know who he is!) – that brought all those crowds to see him that day. It would have been Money, and Threats.