Had been taking a 3 month long rest, and have decided to Start Again, and Happy to do so.

Having decided to do so, nearly had a Crash (of the mental kind), an Absolute Crash, of the type which had made me give a letter of resignation from the Priesthood in 1987 to my Bishop, (from which I came back Real Quick, Thank God, in a couple of months).

This is what had taken me to the Brink:

Things are Not going Well in India. Unemployment is having its Deadly Dance, People are Struggling to Live, and the #politicos, true to the old principles of ‘Raj tantra,’ the ‘art’ of (remaining) kings, politics of today, have taken the Country to the edges of Secession, by things called #CAA and #NRC. More on these later.

Those who had been protesting against it, have been made to have a Real Taste of Democracy. See videos (Violent).

#Modi & #BJP are creating a climate of fear in #India. #ProtestsAgainstCAA are brutally crushed. No one is spared. An #InternetShutdown is underway in #UttarPradesh. This is unbecoming of a #Democracy. #ModiMadness is paving the way for a #PoliceState.
pic.twitter.com/DOmOF6ow49

#YogiKaGundaRaj Master class on 'How to hit cute little kids with lathi on head' Ft. UP Pol

Goons are not sparing cute little kids as well and hitting the little ones brutally with lathi on head for no reason!pic.twitter.com/o0pXr1mPQB

What I found Worse than these was that a Small Child of 15 months was separated from her Parents because they had gone out protesting, and were jailed by the #police. As I had written in Facebook:

The parents of the Baby of 15 months have been arrested by the #police. Her relatives are taking care of her.

The Child is repeatedly saying ‘Aao,’ which means ‘Come,’ calling her Mother.

This made me (Violently) Mad at God, again. …I remember having prayed that I wanted this Baby united with her parents.

It has happened. (It does not happen in every case).

Happy New Years, Folks. Much Love to All. More later.

Just heard about a Third attack in Germany, in which some 10, Young people have been killed, while attending a Music Fest.

While I criticise the Indian police for being High handed, I also Appreciate the Way they arrange Security.

In what might seem Simple things like the attendance of Citizens at Flag Hoisting’s on Independence Day and the Republic Day of India, etc, there is ample police presence, but more Importantly, they ‘screen’ Us, particularly Bags, etc. I know this because it happened to me at Trichy on Republic day this year! 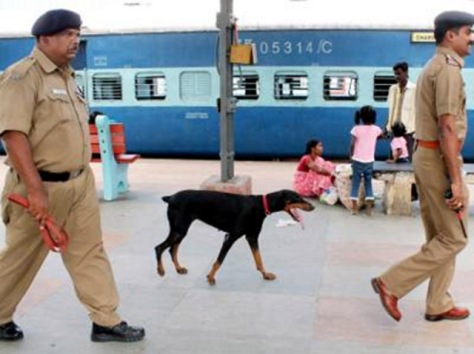 Police presence at Railway station. Notice the ‘Scanners,’ if I have the right word, in the hand of the policemen. …Police personnel are also armed, with .45’s, LMGs and such, which I consider outright Foolish. Imagine firing one of these in Crowded Railway stations, even inside Carriages. I suppose the idea is Intimidation, but this will NOT work with the evil-minded, who will rightly act on the idea that the police would not fire. Add to that the fact that many policemen are armed with WW II Lee Enfield .303 rifles, shouldered, which they cannot even swing around inside a crowded railway compartment in an emergency! …Last but not least, on such personnel, I Very much doubt their ‘efficiency’ with guns. For me, it is a Gun in the hand of a Simian.

Two screeners are visible at right. 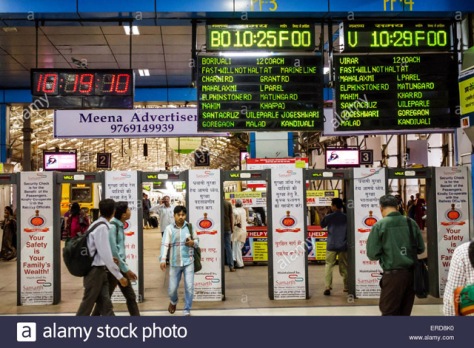 A whole bank of screeners at the Churchgate station of Mumbai.

Not just the ‘dais’ but also the whole of the Grounds where the Public would be gathering is scanned for explosive devises hidden or buried there.

I would DEFINITELY SAY that All police personnel at Railway stations, even the Road, etc, are Polite and Helpful, if not friendly, which is sufficient.

But the Indian police seems to be ‘Trained‘ to react with Rigid and Harsh Violence, and to put down even Peaceful Protests. That is certainly a different matter.

ANOTHER IMPORTANT FACTOR is that You cannot buy ‘Sim Cards‘ without Valid Proofs in India, unlike what We see in English movies! The Opening of Bank Accounts, Even sending and receiving money has to be Validated with Ample Proof like the Voter Id, the ‘Aadhaar’ card, which carries Iris and Finger prints, Or the Ubiquitous ‘Ration Card.’ All of which are Very good things, which would definitely make it difficult for the ‘Ungodly,’ (like Terrorists).

HAPPILY, the Indian system of police protection has not become Draconian like that in russia or in china, – nor even in sri lanka! I consider this a Happy state of Affairs, and Protected.

The system needs Improvements, of course, like, No Pellets! …Western police using ‘Pepper Sprays‘ and ‘Tasers‘ is also Un-Ethical and Immoral.

To conclude, The Western Police Forces would do well to take lessons from India in arranging for Security for Gatherings and Public places.

PS: All images from the Internet.

Please share as to Who is on the ground.

Some latest news: In the name of ‘searching’ for goods forbidden ‘out’ of the forests, these so called officials of the Indian Forest Service (IFS), very possibly guards of the lowest order, have seen Fit and Free to Put their hands into the Blouses of Women.

I hang my head in Shame.

I heard this over the TV news in just the last hour. It is a Tamil channel, and I give the site, a Very Respected, and Impartial one:

The police force, I hear, was formed to provide Jobs for the Uneducated.

They also prove to be the Gundas (rowdies) of the government. 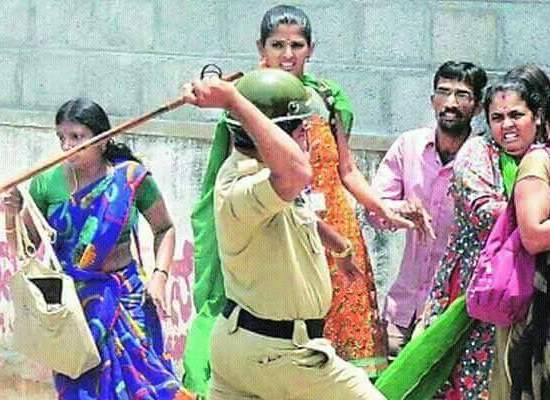 Till Useless DOGS like these are Beaten up and removed from service, I SHALL NOT RESPECT THE INDIAN POLICE FORCE.

I came across this Wonder comment from Patricia @ https://newbloggycat.com/ – which is Most Apt, and Shows What the People think about these fellows:

‘Very disturbing! Perhaps they should be known as lice force….LOL (•̀o•́)ง’

Interestingly, the Hindi caption in Facebook, from which this has been taken, says:

Which means: Our Lively Indian police beating the **** out of the dangerous, equipped-with-deadly-weapons ISIS.

Today is a Sunday. Just two days ago, India observed its Harvest festival, a happy time, if any! And Only two weeks ago was the ‘celebration’ of the New Year!

But have Any of those things made a Difference to Items like these?

Again, just two days ago, young Air Force Corporal Abhimanyu Gaud was knocked down and Killed by a Hit and Run Car.

There are plenty who say that the Hit and Run driver is the son of a West Bengal’s ruling TMC minister, even naming the alleged killer: Ambia Sohrab.

And they say plenty of things about him. 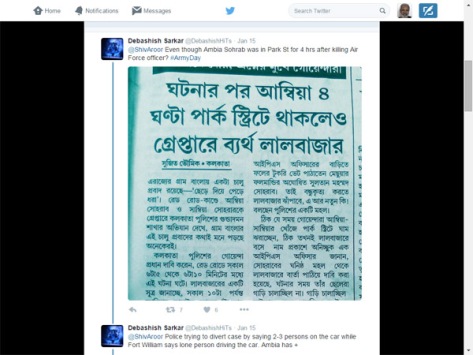 It is said that this fellow has a History of Reckless Driving, Scuffles, Beating Up Police(!), Molestations, and Owning a fleet of 22 Cars! And, Does his Facebook account show off many police friends?

The Indian Police is a very Clever Animal. They just Know who the Culprits are. Several years ago, I Know of a case where the PP of Giridih in Bihar had put up a fence, an Iron Angle thing. Next morning it was not there. Since this PP was a friend of the Superintendent of police, he went to him. He was asked to sit down and have some tea. After about an hour the iron angles turned up. Only, they had been cut into small pieces, ready for resale. The police officer had shrugged. ‘Take what You are getting,’ he had said.

Photo from the Internet, and Not that Fence, Silly! 🙂

Oh, the police Know. It is a Different thing whether they would Act.

For the last 20-30 years or so, it has become that the police will act Only if they get a nod from the politicos.

What have all these things got to do with Our Fine, Hard earned Sunday?

A Member of the Indian Military is knocked down and Killed by a Rogue, and No Action is taken. Hamara Kya Haal hoga Kaaliyaa?

The politicians have to be told and taught that they are Not the bosses. And they can be Told Only If We stand in Sufficient numbers. Democracy.

And Democracy works Only When We Exhibit:

I have called this post: Democracy in India. But is it any different, In any Other country?

On the 2nd of this month, during talks of Improving India’s police force and its efficiency, etc, modi had said that the Indian Screen was showing the police in a poor and bad light.

On the SAME day, this picture had appeared on Facebook. WOMEN are there. All of the People are Unarmed.

Are Citizens Toys for the police, Instruments for their Sadistic Satisfaction and Pleasure?

As Usual, We will find that the great ministers, prime or otherwise, conveniently Do Not even See writings like mine.

Here is a Very moving and personal account of the Tragedy that struck the Taj Hotel in Mumbai. Where one thinks it as the Home-away-from-home of the Very Rich, one of the Simple, Hard working staff is struck down, bringing further tragedy into two more lives, and claims one more in one year.

I consider Kasab, who was a Very young man, as a Brain-Washed Victim himself. Indian police had their Fill of Torturing this Hapless Young Man.

But those who planned, trained and sent him, they live Comfortable lives. To change all this, Relentless and Untiring Effort is Needed from Every Good Citizen.

MEDHA PATKAR is a World famous Social Activist, who has given her life this cause. 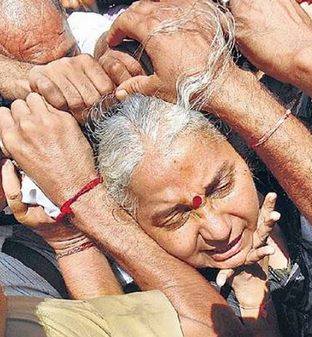 And this is how Our Indian police are treating her. Notice the hand under her chin too.

What training, and Instructions, have Our police officers given their men? At least one top policeman should be sacked for this.

If courts do not take suo-moto action on this, spit on them.