As my friends know, I am not a total pacifist.

Yet, though I have not personally experienced War, much less a World War, AM TOTALLY AGAINST IT (War). Yet…

Besides a few gruesome photographs that I possess of gunshot wounds, (one below)

…We have to remember that soldiers lose both hands and both legs, for whom, I have heard, governments have special homes. Thus, altogether War is Horrible, and to be avoided.

What do You do with/to a Mad Dogs? (VERY much of a reality in countries like India). No Mad Dogs are, or Can be, spared. I personally know of Two cases, where people were bit by them. One of them, locked inside a room, jumped up walls, and howled till he died (this is a very old case).

I have referred to #putin as a Mad Dog. If images are recent, he is not just cool, he is even smiling.

The latest is that he is declaring that Sanctions are Acts of War!

It is absolutely true that he might resort to a Nuclear War if the West joins in.

#putin, #xi, the #north-korean-head and #modi have been ardent students of #hitler. I would say these are observing and testing the water.

What is going to prevent the above named four from launching into further ‘adventures?’

Mad Dogs Have to be put down; not just put in jail or shot out of hand, but have their hands and legs chopped off, and left as examples for History books. …We have to prepare for WW III.

#Ukraine is in unique position, a Small country attacked by a GROTESQUELY large, insane aggressor.

Ukraine cannot b helped militarily as mad dog putin wd not hesitate to use Nuc weapons, tho NATO has more of them.

One appreciates de Restrain of the West in avoiding a Nuc war.

What is wrong with the Death Penalty, anyway? Mankind believes in Retribution.

ONLY Those (Most popes and bishops come in this category) who have their more-than-three-meals-a-day Assured, who live in castles, high risings and enclosed palaces, who have NO idea of Hunger, Pain, Suffering, Rape, Gang Rape and such, can Oppose the Death Penalty.

The ‘Way’ it is carried out may be extremely inefficient, (that is why John Grisham opposes it). I would call it stupidity that man, who has found Most efficient methods to kill people a thousand miles away, has not found one in this case.

But, there Are Scum, like Repeat Rapists, Serial killers, Child Rapists, those who run Brothels, especially those who use Children for Sex, …the list would be long, – who are better off disposed.

Those who oppose the DP might quote the commandment: ‘Thou shalt not kill,’ and say Only the Lord has the Right to Life and Death. Please click on that link for views on this.

There are issues of War, Weapon Manufacture, Atomic proliferation, Abortion, and, THE TERRIBLE SUFFERING THAT GOES ON AND ON IN THIS WORLD. For more thoughts on Violence, please click here.

Let Us take the case of the drug baron guzman, reportedly responsible for 60,000 deaths!

They prepare Underground cellars for them, with an Opening Just on Top, No Doubt at Great Cost, through which these fellows are lowered, and, …within no time, they escape.

About him Wiki writes:

Fortunately and Thankfully he has been recaptured again. But WHY allow this game to go on? The Same Wiki gives guzman as: ‘Is a Mexican drug lord who heads the Sinaloa Cartel.’ All this in the Present tense. That is what happens when We spare the lives of Scum.

Countries and governments say they do not have enough money to Take in Refugees and to take care of them, to Create Jobs, to Join Rivers, and a hundred other things, and, Do We have Any Idea of the Amount of money in Trying to keep Hardened, Repeat-Offender Criminals when ‘Life sentences’ are given them? I say ‘Trying’ because they escape every so often, through the support and help of politicians, jailers and their own gangs. And While they are ‘Inside,’ they Run their Gangs, …and lead a Merry life.

But governments spend on Costly Jails, which remain Unsuccessful in containing these criminals or their actions.

A Mad Dog is a Fearsome thing. I have had occasion to see two, and Worse, one of my family members died of Rabies, though long years ago, and another teacher in one of our schools was put to sleep because of Rabies.

Photo from the Internet.

Even Healthy and Strong Dogs avoid a confrontation with a Mad Dog. The only solution, as far as I know, is to Put them Down. A Sad necessity, in this case.

When it becomes Clear to Society that a person is Not ready to Reform, is a Repeat Offender, in Major Issues, Death Penalty, to me, is the Answer.

One of the Reasons all Philosophers and Thinkers go against the Death Penalty is that We are Not Sure of the Motives, and the Uprightness of the one meting it out. But that is a Different, though Very Grave, Problem.

So there is Enough Reason to give Drug barons, Repeat Rapists and Serial Killers and such, the Death Penalty.

No, No, No, I am Not saying that Love is the Answer, But sometimes We have to Hate too, or anything stupid like that.

The Whole of Christ’s Teachings can be Condensed into One Word, and that would be: ‘Love.’ But We have to Remember that in its many forms, He used the word Love as a VERB. Go and Love, He said, and said it as a Command.

Love is Seeing to it that Their Bellies are Full,

And that there is Not a Drop of Tear in Their Eyes. 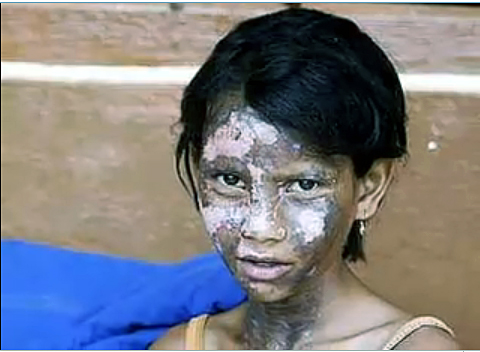 This, incidentally, is Christian Child, Burnt in Odisha, India. Picture from Internet.

When there is a Situation, one does not discuss Where the Arrow came from or Who Shot it, as the Buddha used to say. Love would mean Controlling the Mad Dogs. And that, my Dear Friends, is REAL, Hard Work.

Whether We Whimper around, saying, ‘Let us All Just Love,’ or Go Out and Do things about it, Putting Our Necks on the Block, is, after all, Up to Us. It Depends upon Who and How much of He-Men We are. And We Shall be Judged according to that.